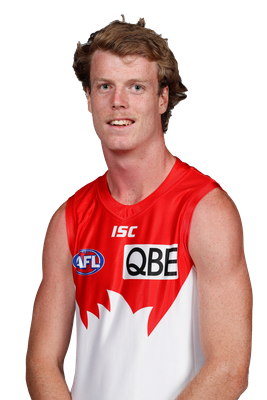 Nick Blakey is a prodigious talent with a laser-sharp left boot, an outstanding overhead ability and searing pace. The QBE Sydney Swans Academy product booted 21 goals in 19 games in a brilliant debut season en route to winning the club’s 2019 Rising Star award, and while he added a lively element to the forward line last year, he’s likely to play on a wing or in the midfield in 2020. Nick is the son of former Fitzroy and North Melbourne champion John Blakey, who’s had a variety of roles on the Swans’ coaching panel since 2006.