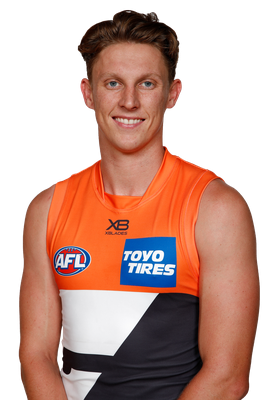 Victorian Lachie Whitfield was selected by the GIANTS with pick No.1 in the 2012 NAB AFL Draft. He is a classy midfielder with rare awareness and decision-making ability complemented by skills either side with hands and feet. Whitfield made his AFL debut in round 1, 2013 and was nominated for the NAB AFL Rising Star award in his first season. Whitfield has been a mainstay of the AFL side since his debut, playing key roles in the club’s four finals campaigns. A move to an unfamiliar backline position in 2018 saw the young star elevate his standing in the game, earning his first All Australian honours and taking home the Kevin Sheedy Medal as club champion.​