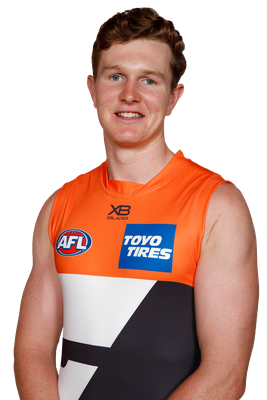 A big-bodied midfielder, Tom Green is an outstanding prospect with clean hands and great vision. Green was dominant for the GIANTS Academy in the NAB League and backed it up with NAB Under-18 All Australian selection after an outstanding Championship with the Allies. Green racked up 23.8 disposals, eight clearances and 4.2 tackles per game as he was named the Allies MVP in the 2019 NAB AFL Under-18 Championships. The grandson of former Richmond legend Michael Green, Tom was nominated for the 2019 NEAFL Rising Star Award after a string of impressive performances for the GIANTS’ NEAFL side.