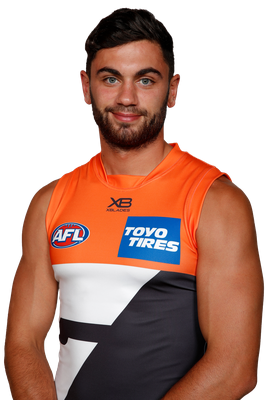 Tim Taranto joined the GIANTS with pick No.2 in the 2016 NAB AFL Draft. He elevated himself among the best junior talents with his smarts around goal and an innate ability to find the footy. Taranto is incredibly athletic, running a level 15.9 beep test, but matching that with footy sense. Tough and competitive, and a great overhead mark around the ground, Taranto made his debut in round 1, 2018 after an impressive JLT Series. Taranto won a Rising Star nomination in his first season and has become a mainstay of the GIANTS’ midfield in just three seasons, winning the 2019 Sheedy Medal in the process.