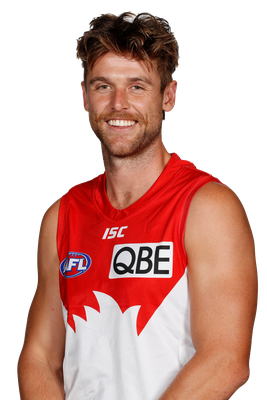 Dane Rampe was denied at several drafts and didn’t land a spot on an AFL list until the age of 22. But ever since being rookie-listed in November 2012, the key defender has seized his opportunity. Rampe made his AFL debut in Round 1, 2013 and played his 150th match in 2019. He’s an All Australian, an emergency for the greatest NSW team of all time and a Bob Skilton medallist, and he’s led the Swans as a co-captain with Josh Kennedy and Luke Parker since 2019. It doesn’t matter if the opposition’s best forward is a tall or small; so versatile and reliable is Rampe that he’s always assigned to the toughest task in defence.